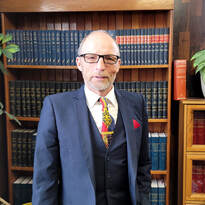 CLEM'S BIO
The Eggert family moved to North Bay in 1969. Clemens Eggert graduated from Chippewa High School and then went on to graduate from Ryerson University in 1975 as a Public Health Inspector.  After a few years as a Public Health Inspector, Clem decided to go back to school to be a Lawyer.  Clem graduated from Queen’s University with his Law Degree in 1984.  In 1986, Clem was called to the Bar.  He started his career with Richard Tafel and John Trussler, forming the law firm; Tafel, Trussler & Eggert.  After Richard Tafel and John Trussler retired, Clem became the sole proprietor of Clemens Eggert Professional Corporation.

Clem is a current member and a former President of the Nipissing Collaborative Family Law Association. Since 1986, Clem has also been a member of the North Bay & District Chamber of Commerce.  Clem was a member of the Ontario Review Board  for many  years and has also volunteered with many different organizations.  Former, Clem is the president of the North Bay Ski Racing Club.

As a family man, (wife, Jamie; daughter, Mackenzie; and sons Madison, and Colton), Clem understands the issues that arise in family law. Clem is also an animal lover, sponsoring a polar bear and owning 2 dogs; Bode and Bauer.  Clem not only has a passion for animals but for the environment as well. In 2008, Clem was recognized for his support and commitment to conserving Canada’s natural wetland  habitats.

Madison was raised in North Bay and attended Chippewa High School. Madison went on to study Business Administration at Brock University and Graduated with First Class Honours from Bond Law in 2019. During his studies Madison competed professionally on the PSA Squash Circuit, representing Canada at the 2018 World University Championships in Birmingham and at the 2019 World Doubles Championships.

ANGIE'S BIO
Angela Decost was born and raised in North Bay and graduated from Chippewa High School. Angie then decided to pursue a career in law and graduated from the Law Clerk program, with honours, at Canadore College in North Bay. Angie joined our Law Firm in January of 2011. Angie is our firm’s Accountant and she also specializes in Real Estate Law. In her spare time, Angie enjoys spending time with her children, being involved in community events and camping.
Email Angie

BODIE'S BIO
Bode is an English Bulldog who was born in October of 2012 in Mattawa, Ontario.  He started appearing at our Law Firm in January of 2013 and has become a face that most people remember.  I guess you could say that he is kind of our mascot.  Bode loves people and people love him.  A lot of our clients have referred to him as a “therapy dog,” as he can always cheer them up!

BAUER'S BIO
Bauer is a Scottish Terrier/West Highland Terrier mix who was born in August 2013 in North Bay, Ontario.  He is the nephew of our beloved Flash, who has been missing since May of 2013.
If you are not comfortable around dogs, we would be happy to accommodate you by putting them in a separate room.
Just let our staff know upon your arrival!